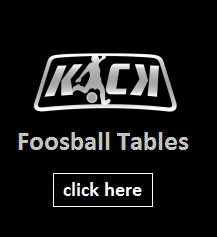 How to Clean and Maintain Your Foosball Table

You won't find a shortage of foosball table brands. Sorting through all of those brands can be overwhelming for those shopping for a table.

A list of the top foosball table brands is pretty subjective. How exactly does one create such a list? What's the criteria? The common denominator among top brands in any industry is quality. Here are some brands that I believe deliver in this area.

You won't find many who will dispute that Tornado has the best line of tables. They're used at professional tournaments all around the world. Tornado originated in 1970, so they have stood the test of time.

If you read enough customer reviews, you will notice a trend. That is, if you really want a high quality foosball table, get a Tornado. I recall reading a customer review that was dissatisfied with the table they bought. They went on to say that they should have just bought a Tornado. You simply can't go wrong buying one.

They have four tables to choose from, all priced between $1000-$2000. You could argue that each one is the best table out there at their respective price.

The best of the best is their T-3000 model, which has just about everything you ask for. What I really like about their tables is the 3/4" playfield. I have seen few other brands match this thickness. I have seen some as thin as 3/16" - such a surface is bound to warp and break down sooner rather than later.

They haven't been around as long as Tornado, but might be one of their biggest competitors long-term. Shelti is a brand under the company Gold Standard Games, which has been in the business of producing arcade games for over 65 years.

A man named Mark Robbins bought Shelti back in 2010. He is well-known for his work in the Dynamo Company that produces the Tornado tables. You can tell that Robbins values quality based on what he has produced so far.

Shelti's top-of-the-line table is the Pro Foos III. It's coin-operated, so it's not meant for home use, but it weighs a robust 375 pounds. Their professional series tables are as nice as any you will find on the market outside of Tornado. They're attractive, made with high quality, and have features that experienced players value.

KICK is one of the newer foosball companies which quickly gained respect from their customers for offering quality products at affordable prices. Those are not just empty words as they are one of few companies on the market which offer a lifetime warranty on all their tables.

Their best tables go for less than $600 and for that price you get a quality table with leg levelers, counterbalanced men, 1 or 3 goalie setup, front ball return, 6 foosballs and excellent customer support which will help you with any issues you might face and make sure you are completely satisfied with your purchase.

Unless you're a competitive player who needs a tournament level table any of their 55" tables will surely do the job.

Garlando is an Italian company that has been around for more than 60 years manufacturing ping-pong tables, pool tables, air hockey tables, and of course foosball tables. Some of their foosball tables are very unique in design, but others are more traditional, giving the customer a wide range of choices.

The G-500 in particular has an indoor and outdoor version that is built to handle the elements.

You can see the European flavor in their tables, but they do make ones that are geared towards an American style of play. Garlando has received awards for safety, and that is evident with their telescopic rods that prevent players from being poked. They don't have the heaviest tables, but the quality is top-notch.

They have coin-operated tables for commercial use, but have a vast line of residential tables. The G-5000 is their highest priced non-coin operated table. It features a highly durable 1-1/2" thick plywood cabinet and 2/3" diameter steel telescopic safety bars.

Fireball is owned and manufactured by Dennis Jiang, with professional table soccer player Tony Spredeman as its global spokesperson. It has several models to offer, one of which is the Fireball ITSF World Cup Model, which is approved by the International Table Soccer Federation (ITSF) for use in its International, Master Series, and Pro Tour events.

The company also has the Fireball Sport and the Fireball Pro Tour for those who have limited spaces and budgets as well as the Fireball Coin-Operated Foosball Table for those who own arcades and need a heavy-duty table that can withstand constant use. Fireball has gained many fans over the years because of its unique designs and durable tables.

Bonzini has been around for more than 50 years and is one of the leading foosball table companies around the globe. The company produces its foosball tables in its 4,400-square foot manufacturing facility in Bagnolet, France, and exports them to the U.S., UK, and other countries.

Bonzini offers a wide range of products that caters to families, professional players, arcade owners, and even official championship organizers. The Bonzini B90-ITSF Competition Table, for instance, has been recognized by the International Table Soccer Federation (ITSF) as an official tournament table, while the Classic B90 Table is approved as an official training table.

The Bonzini B60, meanwhile, is a coin-operated foosball table that's great for bars and arcades.

Roberto Sport was established in 1947 in Turin, Italy, and is one of the first manufacturers of foosball tables. Considered to be a leading brand in the industry, the company produces its tables in Lessolo using modern wood lamination, metal fabrication, and plastic injection machines.

Leonhart is a leading German manufacturer of foosball tables that was founded in 1949 in Pilsting, Bavaria. The family-run company has produced more than 200,000 foosball tables over the past years, and it has partnered with German foosball organization DTFB as well as the International Table Soccer Federation (ITSF).

Leonhart offers a wide selection of foosball tables. The Leo Pro Tournament ITSF is an official table for all ITSF events (including the World Cup and the World Championships), while the Leonhart Professional ITSF is a coin-operated table that's used in ITSF International, Master Series and Pro Tour tournaments.

The Leonhart Sport ITSF is used in Pro Tour events and is ideal for those who want a home foosball table with ITSF certification. Other models are also available for homes, offices, bars, and arcades.

A high quality foosball table which is strong and built to last.

The top-of-the-line table from the KICK foosball table range.

A sturdy table with numerous features at a great price.

A rare table under $500 that features counterbalanced men.

A full size table that looks and feels more expensive than it is.

A table best suited for kids, but is actually pretty solid for the price.