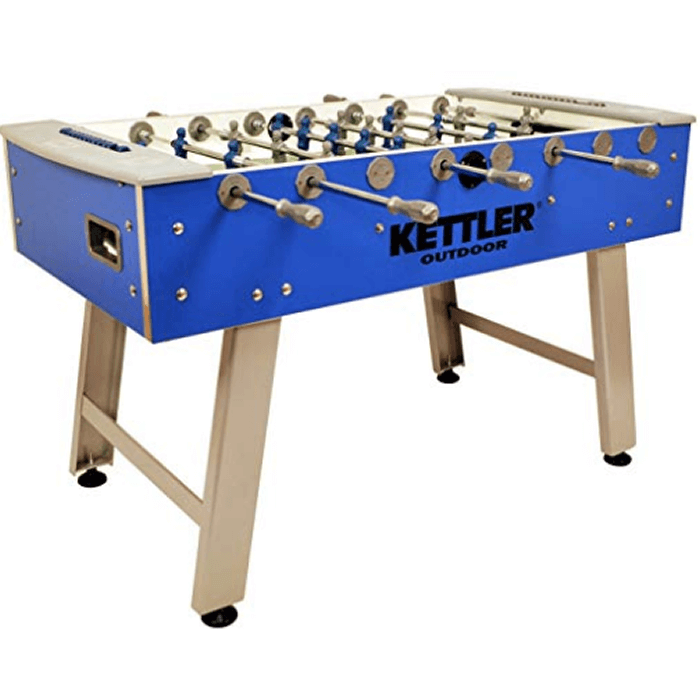 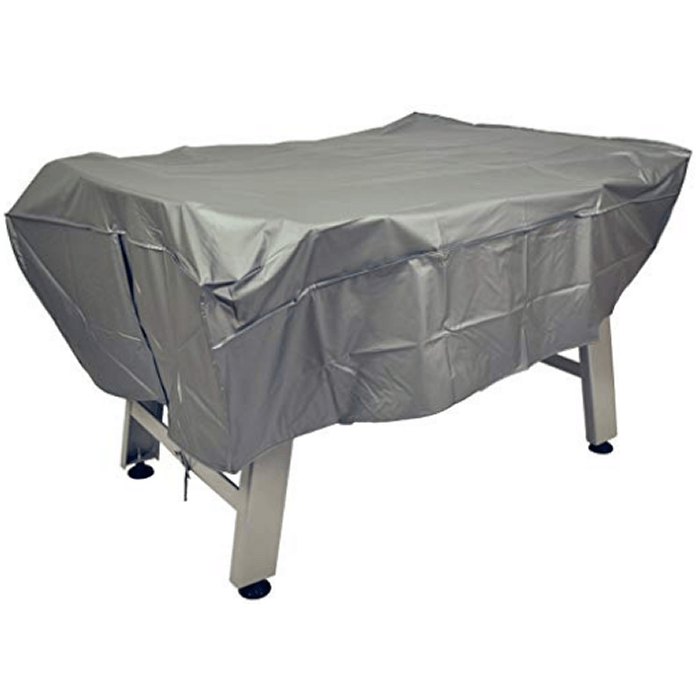 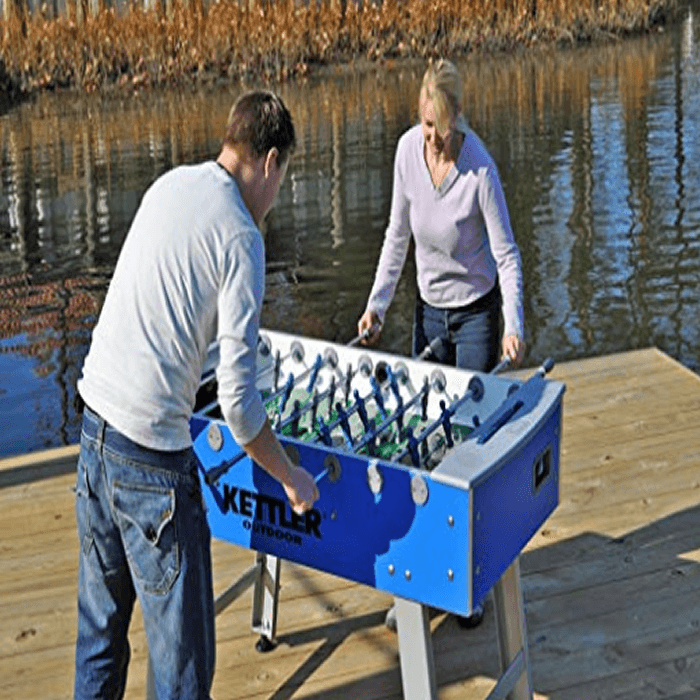 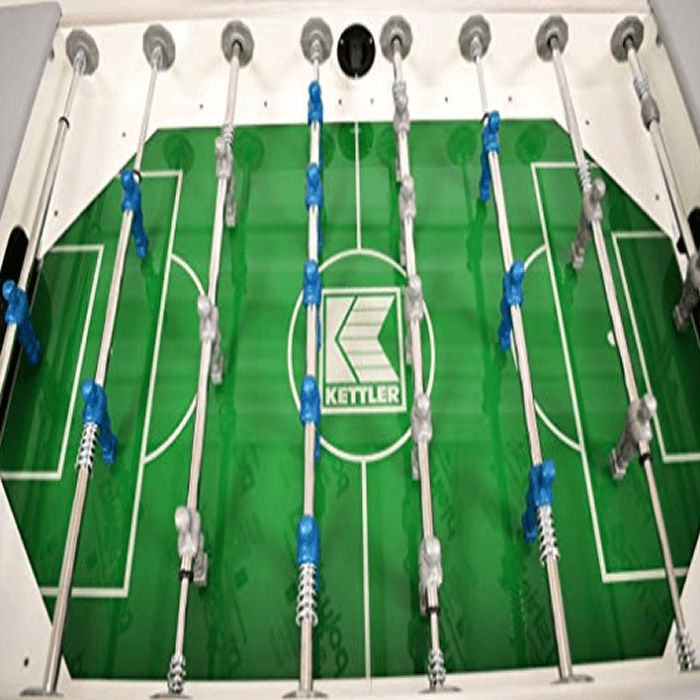 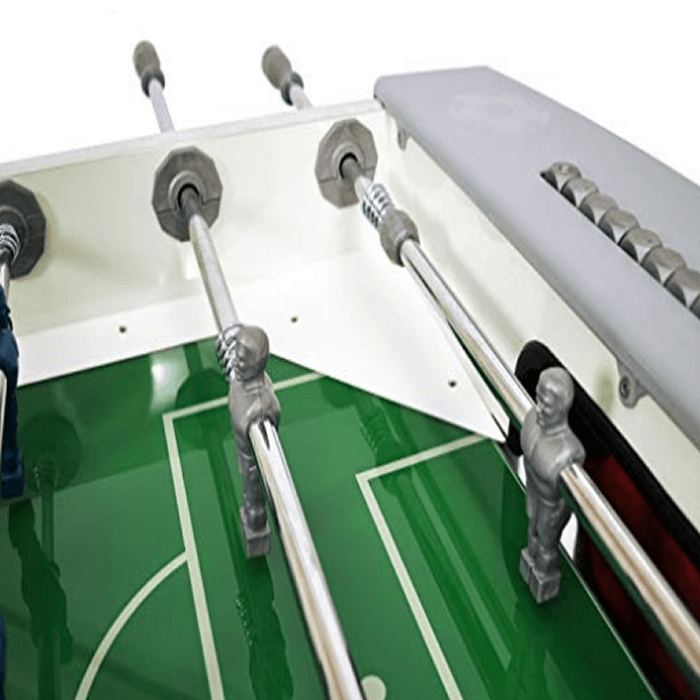 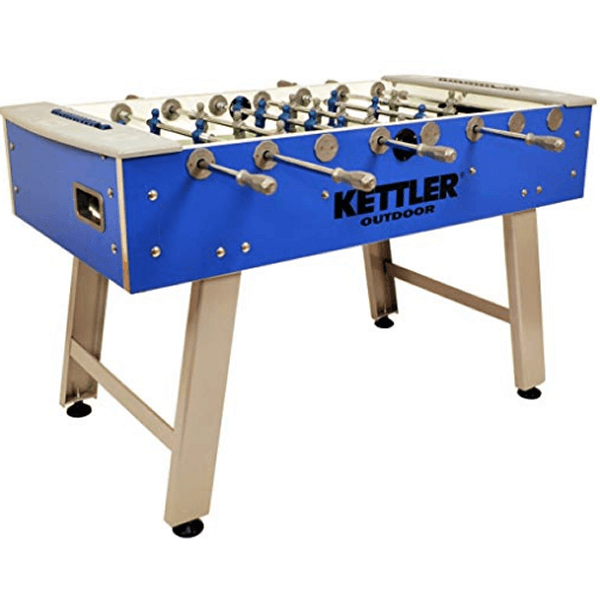 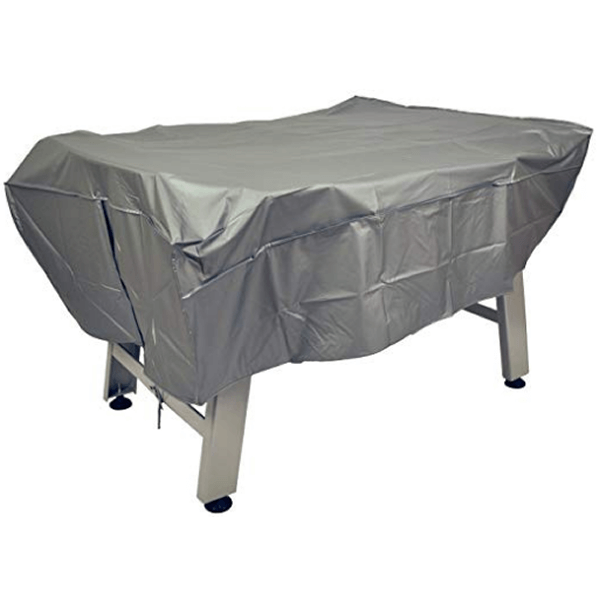 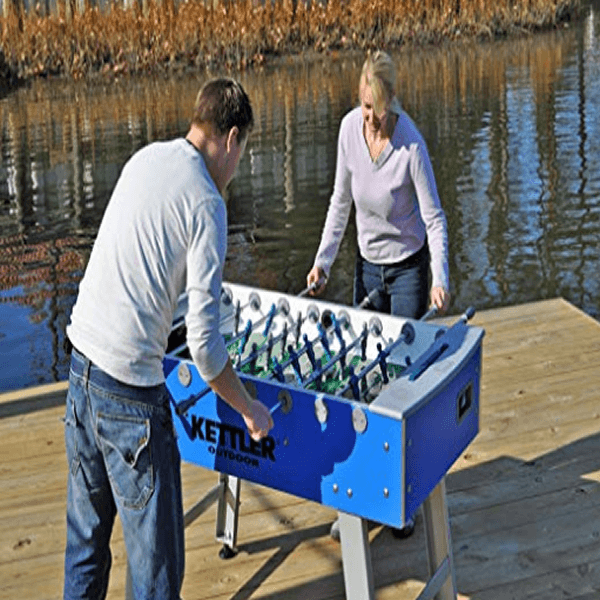 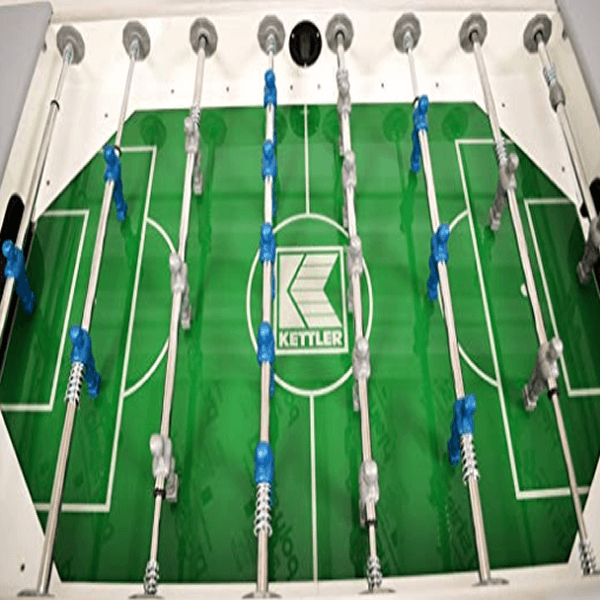 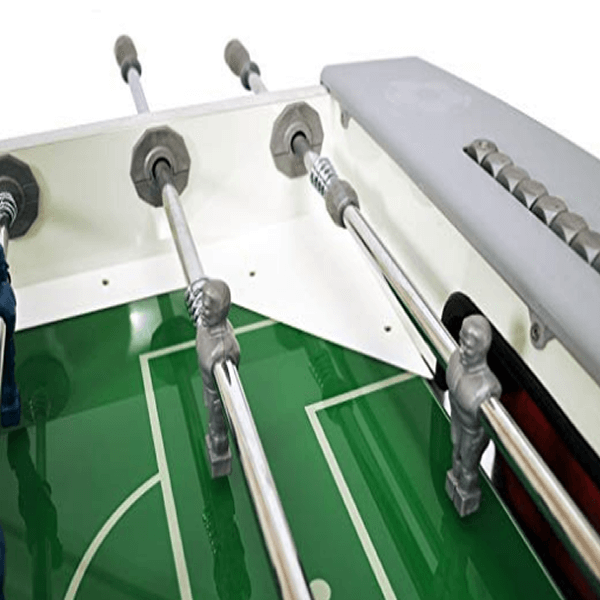 Anyone who wants a high-class, outdoor table at a reasonable price (relatively speaking). The overall quality is excellent. It’s built to handle aggressive play from intermediate and advanced players.

The Kettler Weatherproof table is built for durability, since it’s meant to withstand exposure to outdoor conditions. It’s made out of high quality laminates and weatherproof resin. The playfield is made out of glass. The rods have anti-rust chromium plating, and the unbreakable men are moulded on the rods.

Price tells you a lot about quality, so it only makes sense that a table like this costs around $1,000. It weighs 132 pounds, which means the cabinet is made with thick, quality material.

This is the kind of foosball table that one can expect to last for a long time. Everything about it screams quality. The 3-year warranty is a heavy indicator that Kettler believes in their product.

Glass playfields are pretty rare for foosball tables. You will only find them on higher quality tables. Glass allows for the best possible gameplay because it’s fast and always level. Some of the cheaper tables out there have thin MDF playfields that can warp over time and become uneven.

The telescopic rods don’t necessarily add to the gameplay, but they make it safer because the rods don’t come out on the other side. This way, players won’t get poked by rods. This feature is seen more on European made tables, and is designed primarily to prevent injury to children.

What does add to the gameplay are the nylon bushings, which allow the rods to operate more smoothly. Smooth rods are faster and provide a better overall gaming experience.

The table has good weight at 132 pounds, though it weighs significantly less than one of its chief competitors – the Tornado Sport foosball table – which weighs 200 pounds. The heavier the table, the more sturdy it is, and the less it will move during play. However, the Kettler Weatherproof is heavy enough to all but eliminate movement. Also, this is a table that is meant to be moved indoors and outdoors, so a lighter weight in this instance isn’t all that bad.

The men are counterbalanced, which is a unique feature, and one that allows users to park the men in place at different angles. For example, you could turn the men so they’re parallel to the surface, allowing for more room to shoot or pass.

You’ll notice that the surface has bumpers in the corners. This is designed to the keep the ball moving at all times.

One negative? The handles are tad small for such a high priced table.

Overall, the level of gameplay would satisfy those who are intermediate to advanced players.

Beauty is in the eye of the beholder, but I am not totally enamored with the appearance of this table. The blue and gray scheme is a little bland. The flared legs are not the most appealing look either. While the bumpers on the playfield serve their purpose, it does take away from the appearance some. The glass playfield however is pretty.

I would describe this table as a Jeep – not necessarily built for looks, but built for toughness.

Anyone who wants a high-class, outdoor table at a reasonable price (relatively speaking). The overall quality is excellent. It’s built to handle aggressive play from intermediate and advanced players. 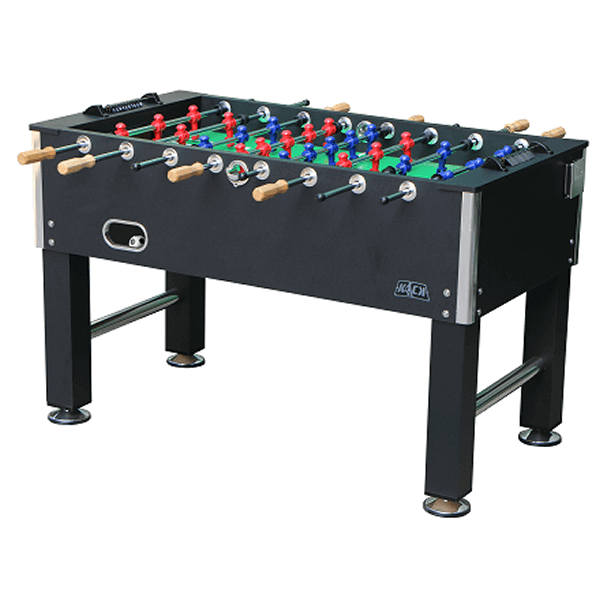 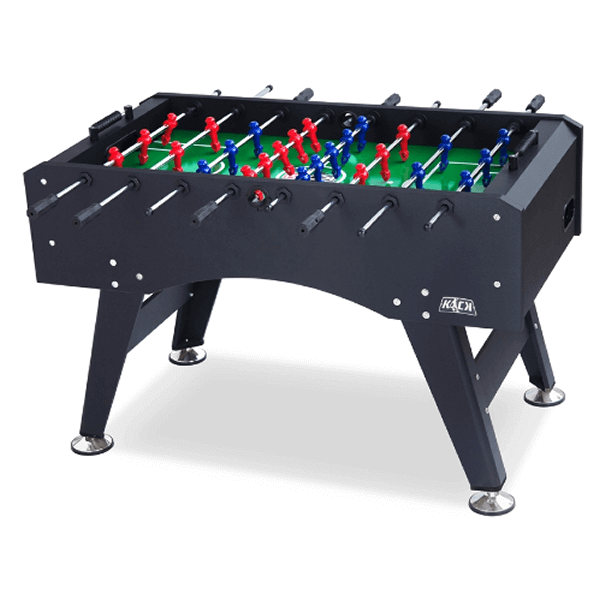 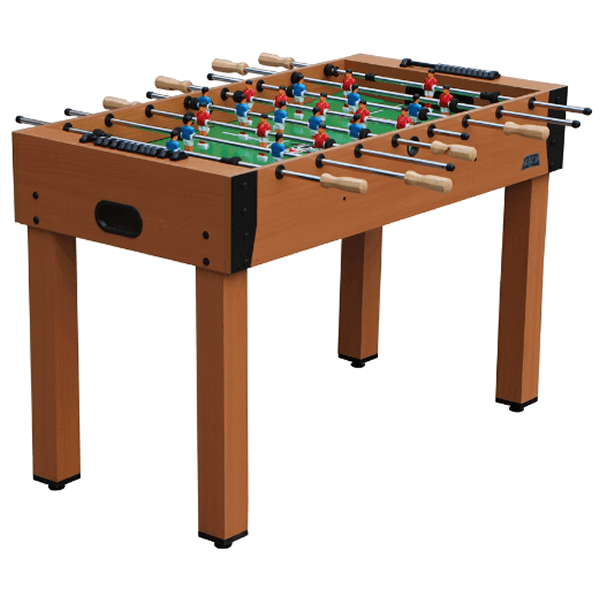 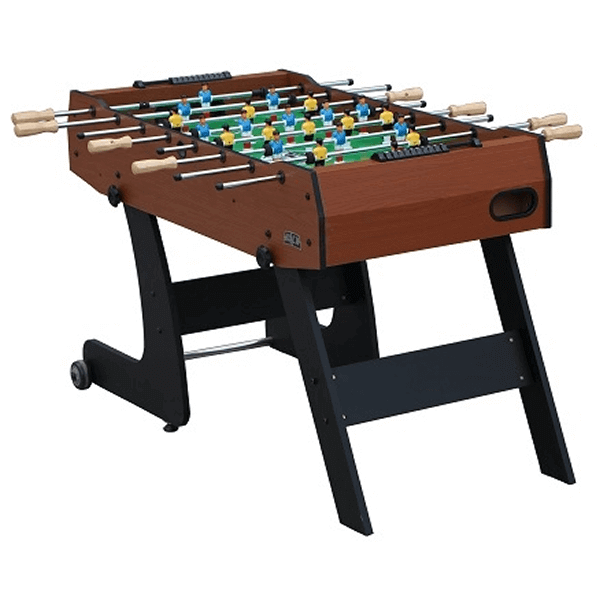